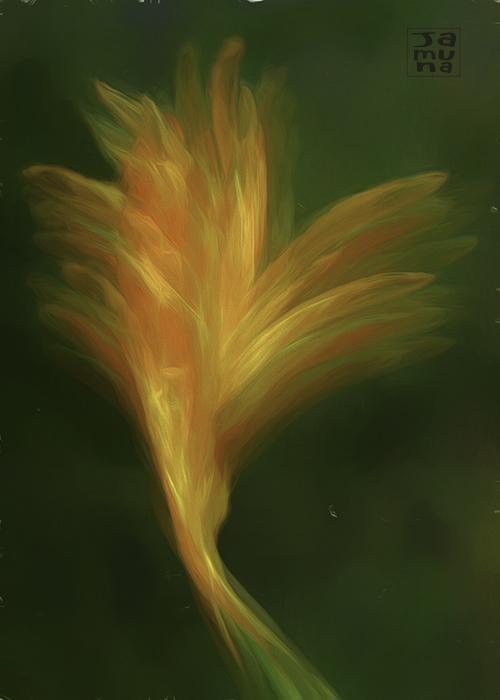 Abstract Painters and paintings are among the many topics that have captured my interests lately. Abstractionists were part of a movement that gave the middle finger to the established way of doing things. They changed what it meant to be an artist, ignoring traditional mediums and experimenting with new materials. They played with gestures, applied paint with their hands, and used tools like housepainter brushes. They took paint and canvas in radical directions. Pouring and throwing paint. Taking the canvas off the easel and painting on the floor. They also changed what representational Art looked like – where once a horizontal line was a horizon, now nothing was certain. They used personal and subjective symbols that could only be guessed at.

As a digital artist, abstraction is a way in for me. Macro photography gets so close to things the image loses its connection to known objects and takes you into the world of form and light – which is the language the abstractionists uncovered for us. A close-up photo can strip our assumptions of what we are looking at and draw attention to details like the curve of a petal or a leaf’s point. Abstraction also allows me to merge ideas and come up with new ones. It gives me the ability to create Art outside the realm of paint and canvas and representational photography.

You will know famous Abstract Painters like Picasso and Jackson Pollock. Below I want to show you some works of others you may be less familiar with.

Hans Hartung Etching #5 from Moma
Appropriately named ‘Etching #’. Representationally this might seem like a bundle of sticks. My guess is the artist had nothing of the sort in mind when he did this.

Robert Delaunay – First Simultaneous Disk from ArtNet.
This is one of my favorite pieces. I’ve attempted to re-create this in different ways using photoshop masks and photographic textures. My texture and color combinations are not as masterful. I’m working on it.

Umberto Boccioni – Dynamism of a Soccer Player
If you didn’t see the title, what what you think this was? Certainly, nothing to do with soccer playing. I might have called it ‘Struggle of the Soul’, which when you think about it, might, after all, have something to do with soccer.
You can download a full version of this image at the link above.

Barnett Newman – Who’s Afraid of Red, Yellow and Blue I
Talk about humor! I think Barnett was a serious badass. He said a bunch of f-u type of things including, “aesthetics mean as much to artists as ornithology does to a bird.” and “sculpture is what you bump into when you step back to look at a painting.”

The Abstractionists were to Art what Drag Queens are to the world of Entertainment and Gender in general. They turned things on its head. They were the ones going left when everyone else was going right. They were saying, who says I can’t do this.

Where Art once belonged to an exclusive few, the Abstract Art Movement blew open the doors of the art world for me and you.

Sizing Up the Picture