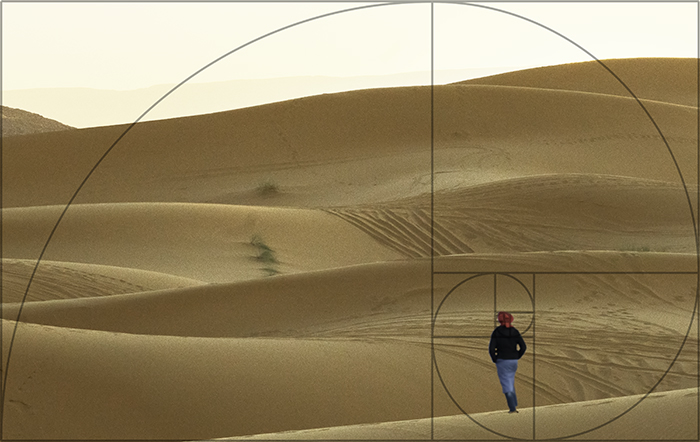 The Golden Ratio is a design ratio that structures the nature of form. It is a mathematical sequence that frequently appears in nature and is found in art and design. Scientific research suggests that pleasing qualities in the human face result from these proportions. The Ratio is found in shells, pine cones, and in many flowers. The Great Pyramid of Giza and Stonehenge are some ancient examples of use. Leonardo da Vinci incorporated it in his paintings and Stradvari used it in the construction of his violins. The Golden Ratio can also be found in Bach’s music and, more recently, in these favorites: Deep Purple’s ‘Child in Time‘ and ‘Firth of Fifth‘ by Genesis.

(Turn up the volume and take this opportunity to (re)listen to ‘Selling England By The Pound’).

In art, you might hear it referred to as the Golden Spiral or the Golden Mean.

The Golden Ratio is derived from a sequence of numbers discovered by an Italian mathematician named Fibonacci.

My head doesn’t deal well with math. Still, I’ve understood the Fibonacci Sequence as a formula in which the third number equals the sum of the previous 2 numbers. So, starting at ‘0’ and counting, the sequence would follow:

Something magical happens when the ratios of adjoining numbers are taken until the mystical number of 1.618 reached. I don’t understand that last sentence beyond what I wrote. However, a curious math brain can easily look it up.

Happily, various forms of overlays incorporating the Golden Ratio can be downloaded and used in programs such as Photoshop. PNGKEY has a number of different forms on this page.

To get an even better understanding of how mathematics works in nature and art, check out this excellent video of Donald Duck in Mathmagic Land.

The Selfie as Art