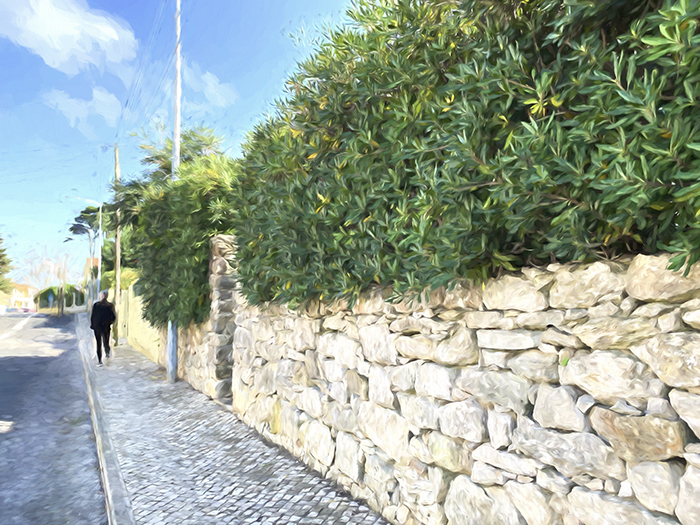 Invisible small birds chittering in the hedges, gives the hedge it's own voice.

Julia Cameron, the author of The Artist’s Way, has released a new book called ‘The Listening Path’. It is set up as a 6-week program that hones your sense of listening deeply. I’m doing the book with my two good friends, Kim LeClaire and Jenn Page.

This week I took a walk to listen to the sounds of my neighborhood.
Having an intention to listen drew me out of my head and made me more attentive to the sounds around me. As I passed a neighbor’s house, I heard scraping sounds of paint coming off the wall. The old lady who lived there has gone, and the rooms are being repurposed.

The sounds of a small airplane flying overhead had me look to the sky. I was surprised by the volume coming from that little plane. It was like a rainfall of engine sounds showering the neighborhood. There is a small airfield nearby, and small planes often fly overhead. I hadn’t realized how used to the sounds I’d become.

A little further, small birds were twittering and chittering in the thick of a hedge. I strained to catch a glimpse of them, but they remained invisible. It was as if the hedges were singing with their own voices.

Throughout my walk, there was a periodic cooing of doves. It is a frequent sound that I had stopped hearing. Now tuning into them, I realized there were dozens of them all over the neighborhood. Their call when sitting still sounds longer and lower, and while flying, is sharper and shorter.

I heard the rhythmic thump-thump of a jogger’s feet hitting the sidewalk, growing in volume as he approached and fading into the distance as he jogged past me—headphones in his ears. I wondered if he worried about cars.

As the road climbed upward, I heard my own labored breathing in my mask and felt pain in my legs as my weakened knees protested. For a moment, I lost connection with the world around me as my accelerated heartbeat drew my attention inward, and my focus narrowed to give my body the energy it needed to climb the hill.

Once atop, I paused to catch my breath. A dog barked from behind the solid steel gate that I was standing next to. He was loudly announcing that he knew I was there. I gave him a “hello doggie”, so he would hear my voice.

I turned the corner to my street and heard dry leaves rustle on the cobblestone sidewalk, a flutter of wings from the dove whom I came upon too quickly, a tinny-sounding engine of a motorbike as it drove past. As I got closer to home, the day had progressed along with the traffic, and more car engines and rolling tires could be heard on the road. My key clicked in the gate. It closed with a metallic clang behind me. As I walked to the back of the house, I heard my little brown dog’s footsteps on the tile as she rushed to welcome me back home with a smiling face and wagging bum.

Life of a Wave – Wabi Sabi

The Art of Walking